The Tale of the Queen-size Bed Frame by Saralee Sky

Posted by Babynut House at 11:03 AM No comments:

A Path with Heart by Saralee Sky

Well, I started my new job as executive director of the Alzheimer Society of Washington on Tuesday - and quit 20 minutes after I walked in the door. Yes, it is probably some sort of record. I really do not know how to tell you what happened exactly, but this is the gist: the current director is just not ready to leave.
This Society was her creation, her baby for 30 years and she has not taken a penny for all of her efforts. I was hired to "take the Society to the next level;" to make the whole operation more professional, to reach more people, especially Baby Boomers, to raise more money - you get the picture.
The whole process of being hired - for a small stipend not a salary - was full of fits and starts. It was clear the board and director hoped I would basically volunteer my time rather than be paid for much of it. I refused to view this position as anything but a job, one which I would give my all, but be paid in kind, eventually if not right away.
When I arrived on Tuesday, it was clear I was not welcome. The current director had gone against her agreement with the Board and decided to stay for another 90 days. The office manager was openly hostile and rude and refused to acknowledge me as having authority over her in any way. She even refused my offer to "work together as a team in mutual respect".
I walked out of the office after being told to leave and return at 3:00 PM for the Board meeting and I knew I would never return. I have not. I called the Board president and told him what happened and said, "I am so sorry, but I cannot work here under these conditions." He was quite distraught and said he was planning to resign himself.
I had a good cry and have been processing all the emotions of the situation. The amount of rage shown me by the office manager was the hardest part to grok. I am still cleansing myself from her fury. I am so disappointed to have been attacked by two women, women who I respected for fighting the good fight. Was I a threat to them? Did I represent too much change?
I don't know. I only know that my heart has been wounded and I must take care to heal from this wound. To learn from it and go on with greater awareness and compassion for those who are closed and threatened by the Power of Yin and all the healing it will bring to this world. This path clearly had no heart for me.
And what is a path with heart? One which has integrity and does no harm. One which leaves the world a slightly better place. One which offers love and light, healing and support for all who walk it, all who cross it. I will find my new path with heart, one that will replace Babynut in my life, but not with the Alzheimer Society.
When the Wisdom of the Grandmothers is heard, the World, (and I) will heal.
***Note: The above events occurred on Tuesday, April 13th. On Friday, April 16th, flowers were delivered to me from the board president with this note: "Wishing you the very best and please accept our apologies for the treatment you received from A.S.W."
Posted by Babynut House at 9:32 AM 6 comments:

In a Nutshell - 38: Pearls of Parenting Wisdom and Humor


Posted by Babynut House at 9:55 AM No comments:

In a Nutshell - 37: Pearls of Parenting Wisdom and Humor


Posted by Babynut House at 9:54 AM No comments: 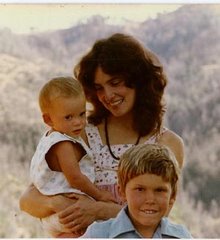 Saralee with her sons, Gabriel and Joseph, in 1981

Babynut House
I have 35 years of experience with children: as a mother, grandmother, therapist for abused children, and executive director of three nonprofit agencies serving children, including chapters of Big Brother Big Sisters and Camp Fire USA. I currently run a B&B in my home.